" Stay ahead beyond modern medicine"

Invest in your health and Let's protect ourselves from low immunity level and prepare ourselves to face deadly viruses and beyond. 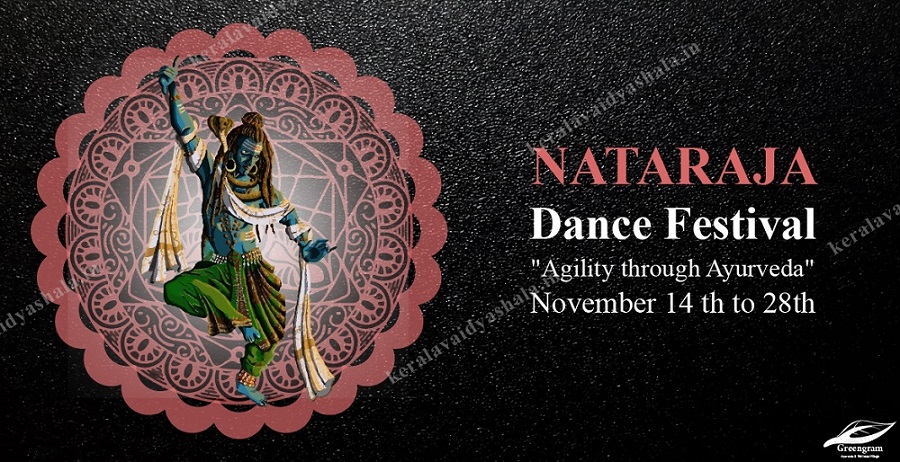 The dance festival aims to familiarise all with Kerala's own dance forms and ive them a chance to forget themselves in the lub-dub of Nataraja's udukku. Isn't synchronising our heart beats with those of the Universal Dance an enviable experience!

To Dance gracefully, one needs agility of the body. Kerala & India  play a host to many ClassicalDance festivals like the famousthe holy city famous for the empire of Budhist, Jain & hindus falls in the month.of October reveals the age- old tradition trends & nuances that is established in all regions of India and is believed that it is the Ayurveda therapies which acts as a agility booster to the Masters performers  and students.
As the body soaks in the oil after a soothing and relaxing Ayurvedic therapy, the body becomes agile and flexible. February is dedicated to Dancers who perform Bharatnatyam, Mohiniyattam, Kuchipudi , Kathakali as well as Art forms like Ottamthulal, for whom Ayurvedic therapies is a must. Kalari is another martial art of Kerala where the body has to be extremely agile and Ayurveda has just the right techniques to achieve that.A one week festival Soorya dance festival in Trivandrum which is world famous and it goes on for more than hundred days  from Sept to Jan . The Mamalapuram dance festival in  Tamilnadu which is famous for its beaches & temples  ends in January is also a treat and rejuvenation for our eyes. The Natyanjali Dance festival in Chidambaram Tamilnadu dedicated to Lord Nataraja which falls in the end of feb for a week.
Khajuraho dance festival which falls in the end of February for a week , coincides with various dance festivals in India like, Konark dance festival in Odissa a two days traditional affair is treat for the eyes falls in 1st week of feb, Rajgir Dance festival in Bihar which is famous for its venue sorrounded by mountains which is of agility from 10th Feb onwards at Greengram.